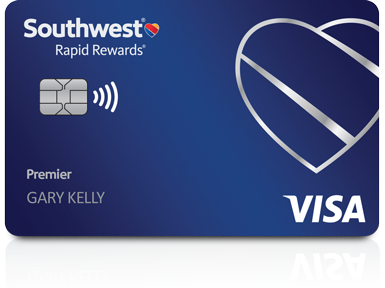 Hunting for an airline credit card is not easy. You would probably hope to get some benefits in return for your brand loyalty. The Southwest Rapid Rewards Premier Credit Card hits the mark. It includes a slew of benefits with a low annual fee of $99. On Southwest sales and with exclusive hotel and rental car partners, the card offers 2 Rapid Rewards points per dollar spent. Also, any dollar spent on other transactions earns you one point. In addition, a bonus is available to new applicants. After you spend $1,000 on sales in the first three months, you’ll get 40,000 points. And, for the first year, receive 3X points on dining transactions.

Auto rental injury collision policies, baggage delay, and missing luggage insurances, roadside dispatch, and travel crash insurance are all included with the card. So the Rapids Rewards Premier credit card could suit your needs well. If you want to contribute to the Southwest Rapid Rewards ecosystem but don’t want to bind yourself to a hefty annual charge, this is perfect for you. Thus, it is evident why this card is so widely used.

The welcome bonus, as well as points received on transactions made with the card, counts toward winning the coveted Southwest Companion Pass. It allows you to carry a designated companion on your flight at no additional cost other than taxes and fees. You will also win 1,500 Tier-Qualifying Points for every $10,000 you spend up to $100,000 a year with this credit card. Those will help you apply for airline A-List status. You’ll also get 6,000 bonus points per anniversary year.

You wouldn’t expect a $99 annual fee airline credit card to come with many perks. But, the Southwest Rapid Rewards Premier Credit Card does have a few that are worth noting. The first is the 6,000-point anniversary bonus you’ll get each year when you renew your passport. Of course, the annual fee is not forgiven the first year. But, 6,000 Rapid Rewards points are equivalent to $90. Hence, the anniversary bonus will almost completely cover the cost after that.

All Southwest passengers receive two free checked bags. But, A-List members also receive instant priority boarding (which includes those traveling with you), a 25% points bonus, the opportunity to book same-day standby flights, priority check-in and security lane access at participating airports, and a dedicated A-List phone line. The above perks of this credit card, plus a 100 percent points bonus and free inflight Wi-Fi, are available to A-List Preferred members after 50 one-way flights or 70,000 TQPs.

The Companion Pass is theoretically a type of Southwest elite status. But, it lacks many traditional airline elite benefits, including bonus points and priority boarding. So, don’t mix sign-up incentives to get the Companion Pass faster. But if you do, you might want to consider winning Southwest A-List elite status to improve your travels. In a calendar year, this includes 25 qualifying flights or 35,000 tier qualifying points with this credit card. Spending on the Premier card earns you 1,500 TQPs for every $10,000 spent in a calendar year, up to $100,000. (or 15,000 TQPs).

All about earning points and redeeming them

The Southwest Rapid Rewards Premier Credit Card earns at the same rate as some other co-branded airline credit cards.Other airlines that are expanding their credit card offerings are gradually displacing this trend. You’ll get 2 points for every $1 spent on Southwest transactions and 1 point for everything else. For long-term spending goals, this isn’t the best card to go for.

Southwest also allows you to exchange your points for gift cards, merchandise, rental cars, hotels, and experiences. But, these choices are significantly less valuable. Southwest also allows you to use your Rapid Rewards points to book international flights on other airlines. The exact redemption value varies, but it’s usually less than what you’d get if you booked Southwest flights directly. Know that when you use your Companion Pass on Southwest-operated flights, your points extend twice as far with this credit card. Hence, there’s no need to look at redemption options other than Southwest flights.

The ease at which Southwest Rapid Rewards credit card points can be redeemed is one of the best aspects of the program. This is because the cost of your award ticket also includes the cash price of the flight. This is irrespective of whether you choose the cheapest Wanna Get Away fares or the most expensive Business Pick seats. This means you don’t have to think about having the best cent-per-point redemption value; if you have Rapid Rewards points, it’s almost always a good idea to use them on Southwest flights. This is because they include flights to Hawaii and other international destinations.

Sign-up incentives are available on all three of the airline’s credit cards. The airline has perhaps the highest public image in the United States. So if you want to get the coveted Southwest Companion Pass, this sign-up deal is the quickest way to get it. But, you’ll only have it for a year. The Rapid Rewards Premier card provides compelling value. Also, some top-notch perks to Southwest loyalists who don’t want to pay a steep annual fee. However, if you rarely travel with a single airline and are willing to pay a higher fee in exchange for more benefits, you should consider another passport.

You can always apply for one of the two Southwest business credit cards to boost your tier qualifying points and extend your pass for longer. Since you’ll already have 30,000 points from this deal, you’ll only have 70,000 points left to win in the calendar year (as long as you received the 25,000-point boost earlier this year). So after spending $5,000 on the Southwest Rapid Rewards Performance Business Credit Card within the first three months, you’ll have earned the 70,000 tier qualifying points you need.

The NatWest Credit Card: this is your chance!

Barclaycard Forward Credit Card: The One You Were Looking For